I got a couple of rolls of 120 from an order my brother made to Just Film SF. Without knowing too much about how this film would look I loaded some in my YashicaMAT 124g and headed out and about.

I tried to shoot a range of subjects under varying lighting situations to get a good idea of how the film handles light and colour. First impressions I got looking at the negatives were that there was some serious colour in there, I also noticed they looked to be of high contrast compared to most other print films with the exception of perhaps Fuji Reala which is similar.

Below is a shot taken at a friends place in a very low light situation. this is a longish exposure I made with the Yashica placed on the table. Now this was also a difficult negative to scan, I got some artifacts I wasn’t happy with and it took me a couple of scans to get this close to how it looked on the night. 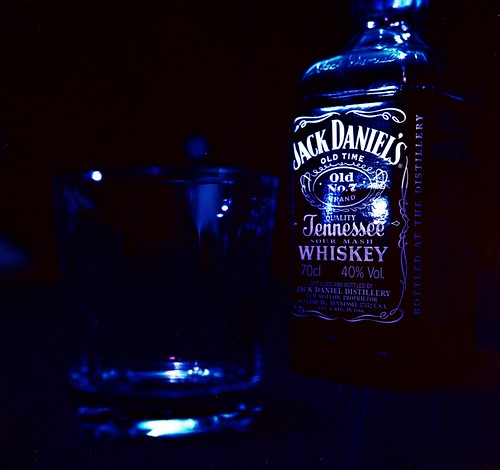 Notice how the blue light makes this photo look like it was taken on Tungsten film. Really magical.

The next shot shows the high contrast colours that Ektar is capable of. This shot was just one of those “A’ ha!” kind of moments, I knew I had to make it. The late afternoon sun was pouring into the underground carpark on just the right angle to illuminate a bright orange wall. Note: I nearly burnt out my retina’s composing for this shot so I hope you like it. 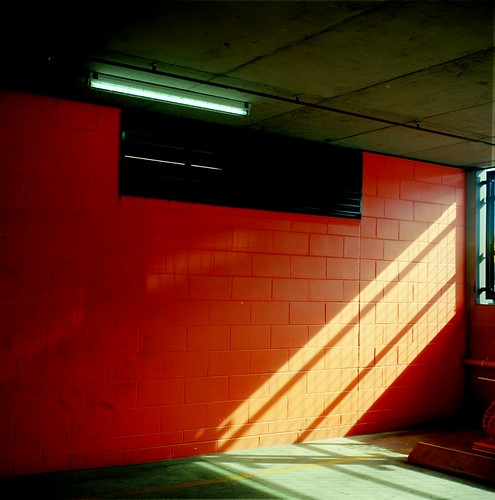 Under bright sunny conditions this film provides a very realistic result, the following shots scanned easily and quickly and required barely any touching straight from scan. The first was a quick pull-up and shoot nearby where I live, the second is literally shot from my front door. Those old shoes have been hanging on the power lines for some time now. Must be good laces. 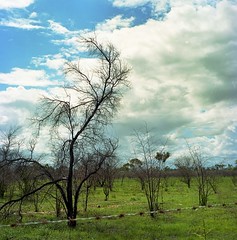 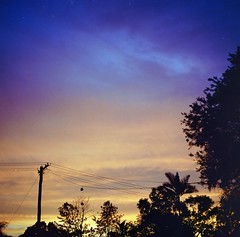 This is a great competitor to Fuji Reala and encompasses insanely fine grain and high contrast, Reala would be the better choice if shooting under mixed lighting or tungsten lighting conditions as it’s fourth layer technology can correct for the colour temperature. Otherwise for landscapes and still lifes in bright sunny conditions Ektar is a fantastic candidate, it is still very useful in mixed lighting conditions but you have to be aware of colour temperature and exposure.

I can honestly say i’ll be shooting plenty more of this and I am now keen to try this film in 35mm to see how it fares.