Many don’t realise that when it comes to TLR cameras there is such a breadth of choice out there offereing many different options and configurations from the most advanced system type TLR’s and large format right down to baby Rollei’s that take 127 film and incredibly simple old voigtlanders. The Yashica A is a beautifully refined, knob-wind TLR from the 50’s.

The model I have features a 3 element in 3 group lens called a Yashikor. It’s a little less sharp than the Yashinons of the YashicaMats and is touted to be far less superior in most respects by the usual internet crowd. In my experience the lens is quite nice, capable of decently sharp images when stopped down and an all round performer. It’s coupled with a copal shutter featuring 10 aperture blades, this makes the bokeh much smoother and creamier compared with it’s less bladed cousins.

The gotcha here is that the shutter features speed from 1 – 300 + B in unusual increments. (Unusual compared to more modern cameras that is.) 50, 100 and 300 being the odd numbers out. However having a slower maximum shutter speed it’s still very useable so long as you don’t try use high speed film in broad daylight.

The shutter is cocked on the side of the shutter selection ring and is independant from film advance, meaning if you are not careful you can suffer an accidental double exposure quite easily. I find the best way is to establish a good habit of winding on after every exposure so you know when you pick up the camera it’s ready to cock and shoot.

The film winding is done by a knob on the right hand side and frame spacing is controlled by the quaint but dependable red window system, you slide open a small metal tab on the back revealing a red window, through that you can see the film backing paper and stop winding when the next frame number shows up. I am always careful not to do this under bright sunlight just in case, With some poorer films it can leave an impression of the backing paper on the film. 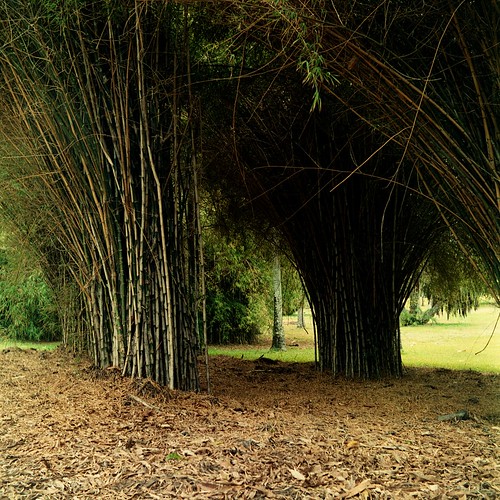 Bamboo Clusters – Note the beautiful rendition of contrast this lens is capable of.
As for general use it’s quite a nice camera, it has killer looks and is light as a feather so easy to drag it around with you all day long. The lenses don’t feature bayonets as in the later Yashica TLR’s so if you like to use filters you will need the push on kind. Also I find that the lens cap is prone to falling off. Adding a strip of sticky felt to the inside of the lens cap gives it a little extra resistence and keeps it on when you need it there. By now you’re probably scrounging ebay looking for one of these but let me stop you right there, while it is a fantastic little TLR, it has what I believe is one major flaw. The good point is that this can be rectified. The focussing screen on this TLR is as dim as glow worms armpit. It really is horribly dark, so much so that only the centre portion of the screen is visible in normal conditions. You almost need a focussing cloth a la view camera. That being said, find a busted YashicaMat on eBay and rip the screen out of that, fairly easy swap if you have jewellers screw drivers. Otherwise you could purchase a bright screen from someone like Maxwell precision optics. 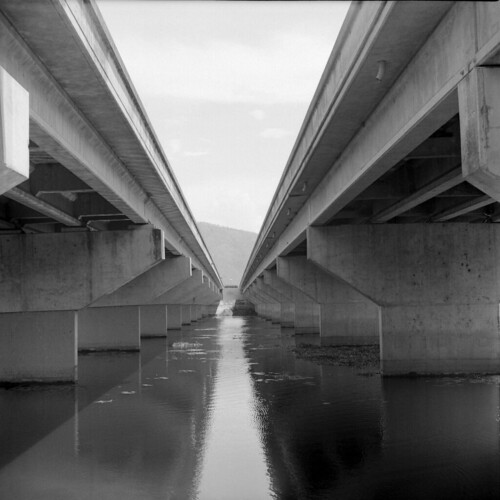 Nathan St Bridge – Showing off the sharpness capable.
The focussing screen is my only real concern with this camera, the rest just gets out of your way so you can get on with making great photos. This camera makes a nice little addition to any collection or even as a serious main camera. It is capable of sharp contrasty results in the right conditions and in the right hands. I enjoy taking this little beauty out from time to time and it makes it on my list of recommended TLRs.