The time has come that I finally write a review of our all time favourite camera. The Rolleiflex. My brother and I have a few Rolleiflex’s and we love them. This review will be on the Rolleiflex T. A 3.5 model which comes with either Carl Zeiss Tessar or Scheider Xenar lens. We have them in both flavours. 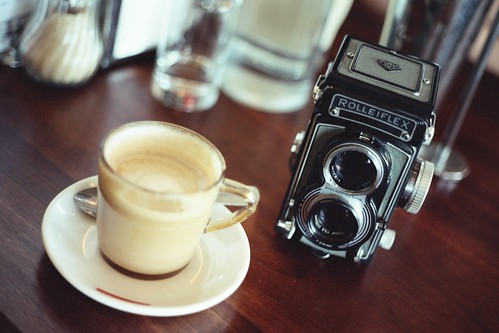 The Rolleiflex began it’s humble origins in 1928 with the first of the 3.5 models. When I refer to a 3.5 model I am referring to the aperture of the taking lens. They also released 2.8 models in the 1940’s. Several models have been introduced covering more professional needs and more amateur, down to the Rolleicord of which you can read my review here. The rolleiflex was the trend setter of the Twin Lens world. While Twin lens reflex cameras had existed before, they were far too bulky and unreliable. The Rolleiflex is widely known as the “THE” camera that set the standard in TLR design. Many offshoots came from the original Rolleiflex design with companies all over the world creating their versions.

The Rolleiflex makes use of a Waist Level Finder (WLF) as opposed to traditonal viewfinders which are very dark, small and inaccurate by comparison. The WLF of a Rolleiflex is a magical composing device. It allows comfortable, ergonomic viewfinding which covers 100% of what will end up on film. The only Caveat is Parallax error. You can read about Parallax error Here.

Composing on the WLF is easy and allows the photographer to concentrate more on framing and balance as the image is reversed. The ground glass is bright and easy to focus with. Some models have additional split screen focussing aides. Most Rollei WLF’s also have a pop up magnifier which makes achieving accurate focus very simple and the WLF’s on some of the Rolleiflex’s are removable allowing for a Prism finder to be attached for sports or documentary photography where you will be on the move and can’t be distracted by the reversed image.

The negative size produced is the very common (for the time) 6×6 size. That ends up being an actual 56mm x 56mm square. Being a square format means that there is no need to tilt the camera to get a landscape or portrait orientation. A crop can later be applied in printing to achieve these results making this another great feature of the Rolleiflex. Masks can also be inserted to crop the image down to 6×4.5 or even smaller is the RolleiKin adapter which allows for the use of 35mm film in the Rolleiflex.

Lens quality is superb while a little soft in the corners. Wide open it sharpens right up across the board from 5.6 onwards. many photographers have claimed the the Zeiss optics particularly suit f/11 on the Rolleiflex’s but that is subject to opinion. The Zeiss Tessar lens is of 4 element design and has been copied by many TLR manufacturers due to it’s simplicity and ability to resolve insanely fine details. 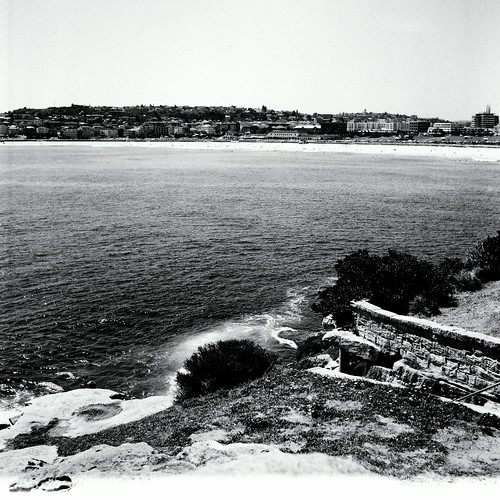 As for useability, I have found that the Rolleiflex is equally at home in a studio or slung around my neck. I really can walk around all day with a flex over my shoulder. It’s light enough and discreet enough that it’s never a burden as some SLR’s can become with their long heavy lenses. In the Studio the Rolleiflex also performs excellently coupled to any form of studio lighting situations, ranging from hot lights to studio strobes and radio triggers.

Adjusting the aperture and shutter speed is done via one small knob on the left of the taking lens (while camera is in hand.) A sliding up/down action will select EV, while pulling out on the knob first will allow aperture to be selected independently of shutter speed. an EV number scale is shown on the left of the viewing lens and Aperture/Shutter speed scale is listed on top of the viewing lens. Focussing is via the main knob on the left of the camera which also houses a reminder for type of film. Film winding is a lever wind which in one direction winds the film to the next frame and in the other cocks the shutter and allows the lever to be nestled back into the camera body out of the way.

The 3.5 features a Bayonet I filter holder on each of the lenses, this makes it easy to snap on filters and lens hoods as needed. The lens hood uses the outer ring of the bayonet allowing filters to be used on the inner ring. A range of filters are available including the popular Rolleinar close up filter set allowing close focussing of subjects. Be aware that when using the Rolleinar there may be some parallax error.

Here is a shot taken with the Rolleinar +1 in Centennial Park in Randwick NSW. 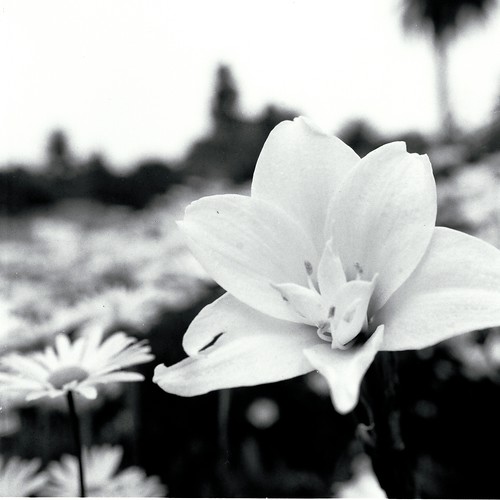 This remarkable camera has stood the test of time lasting over 80 years during it’s lifetime. You can still buy them new today! Although Franke & Heidecke have suffered and a new company has taken the reins, only time will tell if the legendary Rolleiflex camera will live on.

The fact it has been produced for so long is testament to not only the build quality and popularity of this camera but just how sexy TLR’s in general are. Flickr even has a Girl with a TLR group.

If you have any questions or comments i’d love to hear from you, head on over to the contact page.