Basically one can think of Bromoil as a cross between painting and photography. In bromoil you take a gelatin silver print and bleach out the silver, leaving a blank piece of paper, this is called the matrix. You then soak the matrix in water, so that the water is absorbed into the gelatin. Then blotting off any excess water you start applying an oil based (lithographic) ink. As oil and water don’t mix the ink will not stick to the water soaked gelatin but will stick to the paper with out gelatin.

Bromoil is an alt-process (Alternative process) which is derived from the oil process which dated back to the mid 19th century. Bromoil was very popular with ‘pictorialists’ of the early 20th century. Now here in the early 21st century we are seeing a revival in old alt-processes. We here at Thorley photographics have been dabbeling in the bromoil process. 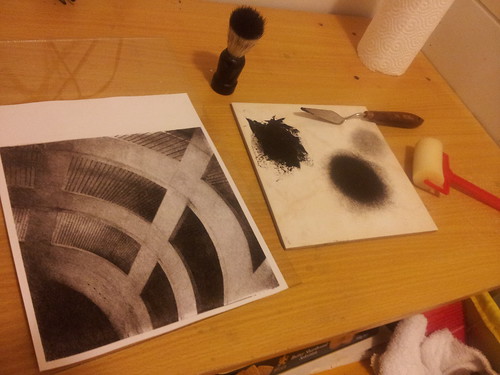 A bromoil print has a more painted look, due to brush strokes being visible in the finished print, this also makes the final print look softer. Because you ink a bromoil by hand, you can chose where to ink and where not to ink. In this way bromoil is like an early version of photoshop, you can ink something in or out. You can also use a pencil eraser to rub out things too. No two bromoils are the same, even if they are taken from the same negative, each one is unique.

A bromoil print is considered more archival than a gelatin silver print, after all it is just ink on paper.

Gryspeerdt and the Bromoil Process