When the venerable RB67 is mentioned in on-line forums people start coughing up all sorts of stories about how heavy and unwieldy they are, how the mirror slap alone can cause a shock wave big enough to damage all the digital sensors in a five kilometre radius and that if dropped on your foot you’ll know the pain of so many cartoon characters who’ve had mishaps with an anvil. 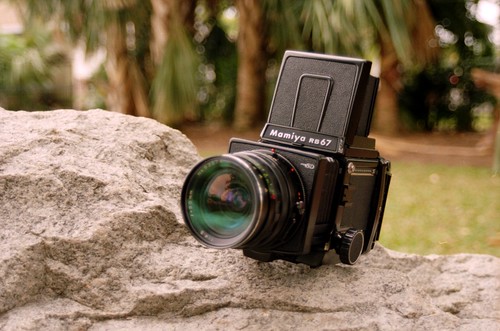 Ok firstly let me start by saying that yes this is quite a large camera, and yes it would hurt if you dropped it on your foot. That being said it’s definitely not as bad as people make out. It’s a true professional work horse, a studio system camera that can easily be handheld and is capable of amazing results. There are several really interesting quirks with this camera but it’s loaded with features and can be coupled with some of the worlds finest medium format lenses. So lets kick off with some history and specifications.

The Mamiya RB67 has been around for quite a while, it was first produced in 1970 under the name RB67 Pro. since then it has undergone a few basic changes but the basis of design has remained the same all these years. In fact you can go buy one new today!

The RB is a true system camera, everything is removable and replaceable, The lenses use the breach lock Mamiya mount and you have a choice of 14 different leaf shuttered lenses for a whole host of photographic needs. The focussing screens are also removable as is the finders which come in a variety from simple waist level finders to chimney and metered prisms. The backs come in varieties for different film sizes with the standard being a 120 6×7 back for 10 shots per roll. 220 backs are also available as well as Polaroid backs. The backs revolve to allow framing in portrait or landscape orientation, that’s where the RB in the name comes from (Revolving Back.) This means you can keep it on your tripod or in your hand without having to flip it on it’s side as with 35mm SLRs. The backs are also coupled to the viewfinder so your frame lines adjust automatically to show the orientation, it’s really handy to not have to think about this when shooting. If you’ve come to this system from a square format 6×6 camera as I have then the new aspect ratio takes a little to get used to but having a slightly long or slightly tall image isn’t too bad at all, in fact it can actually be good. I thought to begin with that this would be my biggest problem, I absolutely love the square format and see instinctively this way. Moving to 6×7 wasn’t as bad as I thought and I’m getting used to the aspect, Hey! at least it’s not like 35mm and 6×9.

Now lets talk about the shutter and the action of taking a photo. People say that the mirror slap is loud enough to wake the dead, I haven’t found this and in fact despite the size of the mirror it does a great job of not creating extra camera vibrations, when a photo is taken the mirror flips up as the lens is stopped down then the leaf shutter in the lens opens for the duration set and then closes again, all in an instant. The mirror remains up until the camera body is cocked again. Cocking is done via a large lever on the side of the camera body. the film must be wound forward independently of this. Which gives you the ability to create double exposures if you so wish, however there is a lock to prevent it happening by accident. Once the film is advanced and the camera body cocked the mirror is flipped back down ready to compose the next shot. 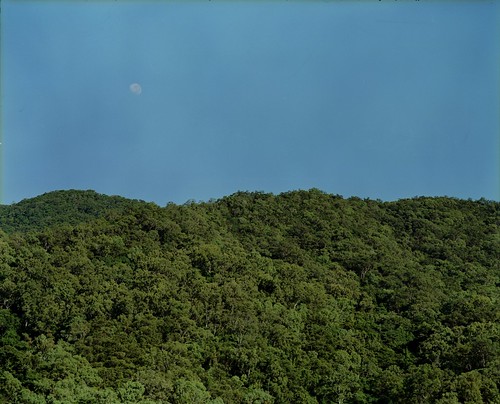 There are several nuances to note when it comes to shooting, the film backs have a dark slide so you can remove them mid-shoot to change backs. This needs to be removed before you take a photo, if it isn’t then you can’t release the shutter. The shutter button also has a locking ring around it that needs to be in the “unlocked” position before it can be depressed. Focussing is achieved via the large knobs on either side of the camera body. The lens plane is moved forward to reveal the bellows. A bellows focussing system allows macro photo’s natively which gives the photographer complete creative control. There is a distance scale listed on the side where the bellows retract, use this distance as a guide to set floating elements in some Mamiya-Sekor lenses and as a reference for bellows factor exposure adjustments.

The lenses are of leaf shutter design, meaning that they will sync flash at any speed up to the rated shutter speed of the lens, usually 1/400th or 1/500th.  All the exposure settings are set on the lens rings. Some Mamiya-Sekor lenses have floating elements that can be adjusted to ensure perfect focus right out to the corners. This is critical for things like copy work and very desirable for landscapes, however there are tolerances that can be set if you need to shoot fast. The body needs to be cocked in order to remove the lens from the camera. If you plan on storing the lenses you need to release the shutter in the lens once it’s removed from the camera, I won’t go into detail here as there are good youtube clips on how to do that.

The lenses feature your usual set of shutter speeds down to 1sec + T (not Bulb) T is for “Timed” release. If you set your lens to T and press the shutter it will stay open for as long as you want (even without your finger on the button) the lens will stay open until you either, depress lightly on the cocking lever or rotate the shutter speed selection ring back to 1sec. Or if using a shutter release cable, depress the cable a second time to release the shutter. The T mode is excellent for long exposures at night, you can “set and forget.” Especially as the RB is a fully mechanical wonder you don’t even have to worry about batteries draining on you during your 2 hour long star trails photos.

Next interesting feature is the mirror lockup knob on the Sekor lenses. On the left side of the lens barrell is a small knob with 2 markings, M and N. The N is for normal shooting, the M is for the mirror lock up mode. If you wish to lock up the mirror for a long exposure or for some other reason, set this to M. Fire the shutter. The mirror will flip up, but the shutter has not fired. Attach a release cable to the MLU selection knob and depress the release to fire the shutter. Cock the shutter as usual and the mirror will drop down ready for the next shot. A little odd but very useful.

The biggest problem I’ve found with this camera isn’t as much it’s weight but it’s size does make it a little unwieldy at times, it’s fine on your shoulder with a strap on but still doesn’t seem to hang neatly just how you’d like it, I guess it’s just part of getting used to the different shape of the camera.

For me this is a fantastic camera for landscape, architectural, studio and portrait work, it even does a swell job as a cart around camera for random shooting/Street photography but isn’t best suited to street. As usual your mileage may vary but given it’s adaptability and the incredibly sharp lenses this camera will always find a spot in my heart.

It’s even great for taking photos of other cameras…. 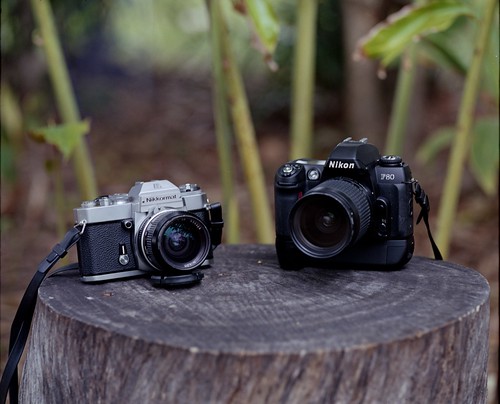