In this part of my series on lighting I am going to talk about artificial light. This is the type of light that we create and craft to make our subjects pop. It can be used solely or to complement natural light in many different situations and setups. I will just be covering the bases of; A Brief history of flash, Why use flash, When to use flash, off camera flash, hot lights and fill flash. There are far better resources for flash lighting out there and this is written as an introductory tech article. For further reading on lighting, I thoroughly suggest you purchase Minimalist Lighting written by Kirk Tuck. Also check out Strobist.

Early in the history of photography before the flash, photographers relied on the sun as the primary lighting source, this meant that night time exposures were impossible and cloudy overcast days were ruled out as well. Early emulsions were very slow and required lots of light and exposure to produce good results. Many techniques were experimented with to produce an artificial light that could be capable of lighting a subject or scene in these less than ideal lighting situations.

In 1862 Edward Sonstadt experimented with Magnesium for photographic lighting. Magnesium soon became one of the more widely used lighting techniques for Photography. A ribbon or strip of magnesium was burned to create light. Reflectors were used widely and in many designs. Magnesium powder was also introduced by way of being blown into the flame of a spirit lamp to create a bright flash.

Several photographers can be credited with inventing what soon became the more popular option to Magnesium, Flash powder. Essentially mixing magnesium powder and potassium chlorate, an explosive powder was born that produced a bright short-duration light. Although dangerous, it was a hit with photographers all over the world. Many accidents were reported due to its explosively combustible nature.

In 1925 Paul Vierkotter used an earlier principle to seal magnesium in a glass globe and successfully ignited it using an electrical current. Soon after in 1929 the first electronic Flash bulb called the Vacublitz hit the market, it was aluminium foil sealed in oxygen produced by the German electric company “Hauser.”

Flashbulbs were popular right up into the 1970’s, the size came down to around 3cm and coupled with good reflectors and synchronizing cables they gave dawn to predictable exposures in flash photography. Manufacturers of the time produced hundreds of designs and sizes even adding coloured lacquer to the glass to match the film sensitivity of the time.

Electronic flash units have now reached a place where they have replaced flash bulbs. With electronic flash, a battery or other power source charges a large capacitor to around 300 volts which is connected to two electrodes in a bulb filled with xenon gas. Another smaller capacitor is also charged which, when triggered, dumps it’s output through a transformer to create a very high voltage to a third electrode in the bulb. The voltage causes the xenon gas to ionize, which causes a conductance through the gas which produces a very bright light until the power from the capacitor is drained and the light drops off. All this happens in about 1/1000th of a second from fully charged. Modern flashes synchronise themselves with the camera’s shutter in order to light the scene while the shutter is open. This happens through a sync cable or via the camera’s hot shoe connector.

Many modern flash units are available from many different brands with most operating best when matched with the camera manufacturer. Modern flash units have Auto and TTL modes where they will measure the light outputted against what comes back through the lens so that power can be cut to provide just the right amount of light at the right time.

Many modern flash units and studio strobes have features that allow less output in order to control how much light is falling on their scene or subject. These are normally set in incremental fractions of full power output, 1/8, 1/4, etc.

The Why and When of flash

Choosing what sort of flash you want to use depends on firstly why you are using flash and for what situation. On camera flash provides flat lighting and isn’t best suited to portraits and people unless first diffused or bounced. On camera flash can be very useful for product photography and for shooting when on the move or when setup time is minimal.

Choosing to use a flash in otherwise well lit conditions may seem like an unnecessary option however sometimes it can make or break an image. “Fill” flash can be used in high contrast lighting situations to provide “some” light into the deep shadow area’s giving detail to an image. 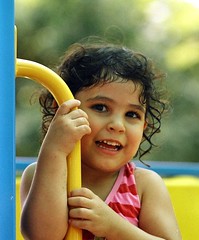 Fill flash is often used with TTL or Auto flash control to provide just enough light to give subject content detail in the shadows and still expose the scene accurately.

That being said it’s not wise to use flash as the only source of lighting if you can’t expose the scene evenly or with enough background detail. (Unless that’s the look you are going for.) Flash lighting like this is the primary reason that indoor flash shots look crap and often the camera or on-camera flash unit cops the blame. This simply isn’t the case. If you are going to shoot in low light conditions use the flash help the exposure not to hinder it. Longer shutter speeds can help expose backgrounds while the flash lights the subject or foreground. Keep in mind that flash exposure is ONLY controlled by Aperture and not by shutter speed.

A flash burst will generally range between 1/1000th of a second to 1/20,000th of a second before dying off. Thus no extra length of shutter speed will let more flash light in, only more ambient light. The key is to meter for your flash. Set your aperture and THEN set your shutter speed to expose the rest of the scene as needed.

Now we get into the juicy part. Off camera flash is a topic that I could discuss in way too much depth for this article. However if you know enough basic information about off camera flash and want to jump into the deep end then I highly recommend you head over to Strobist As they have many in depth discussions, articles and tutorials to sink your teeth into.

Off camera flash can be achieved through many different methods and is a way to give you dramatically improved control over your lighting. You can use off camera flash for a whole host of situations and subjects and with practice and a few cheap speedlights you can be on your way to mastering the art of lighting.

Before cheap asian electronics were being massively produced and shipped around the world for mere pennies, there was only one main method for off camera flash. Using the PC Sync cord. You may remember and some of us still use flash units that have the pc sync cord built in. They were primarily produced for camera’s that lacked a hot shoe and allowed us to tether the flash to the shutter via a cable. When the shutter was tripped a small electrical pulse travelled down the wire and set off the flash. Long sync cables were used to run all around studio’s to set off multiple flashes and strobes. Thankfully those days are all but over.

Optical flash slaves were invented as a way to combat this problem, essentially they are a small optical sensor mounted to a hot shoe on one side and a standard tripod mount on the bottom. Slotting a speedlight into one of these means that they can be setup on a light stand anywhere in the studio and triggered by the light from another flash unit (including on-camera flash.) The beauty is that many flashes can be set off at once, easily and cheaply. They retail for about $12AUD on Ebay.

Radio flash triggers are the latest and greatest toys to play with when it comes to off-camera flash. A transmitter sits in your hot shoe or tethered with a sync cable, When the shutter is tripped it sends a radio pulse to a receiver which in turn triggers the flash. All this happens at the speed of light. This allows “only” an off camera flash to fire not needing a host flash as with optical slaves. Many modern flashes come built in with receivers and some of the latest cameras have transmitters. Pocket wizards are very expensive but luckily for us Ebay comes to the rescue with cheap asian versions costing a fraction of the price.

What to do when you have no flash? Easy! Use some hot lights. They are in my opinion the most versatile and cheapest lighting solution. Do you want to know why I love hot lights so much? simple. The effect of the light can be seen by your own eyes before your camera even comes out of it’s case. No need for flash meters or time wasted with digital or Polaroid test shots. Simply set up your lighting and subject, Adjust as necessary and take the photo. Done!

Hot lights or photo floods as the expensive studio ones are called, are simply a high wattage light source in an enclosure. Cheap ones are simple and consist of literally a bulb and a power cable, More expensive ones have variable output and multiple bulbs.

You can DIY your own easily and cheaply. Standard reflectors and Edison screw mount light bulb holders will do perfectly and can be had cheap from any bunnings or local hardware store. You may have to search a little harder to find nice frosted high wattage bulbs. The ones in my hot lights are 300w and light up most of my back yard when turned on outside. Bulbs will come in different colour temperatures so be sure to know if it’s balanced with your film or be ready to use filters to correct it. For more information on light colour temp refer to the The first part of this article.

All the light modifiers I talked about in Part I can be used with; natural light, flashes and hot lights. There are no rules for any of this. Whatever works, works.

If you have any questions, comments or find any of this technically incorrect please let me know. Most of this information comes from my own experiences and some of it from books and technical articles i’ve read online. I love feedback of any kind so please feel free to Contact me.