Photography is all about light. Without light, Photography wouldn’t exist, much less anything else. It’s our job as photographers to understand light and to manipulate or create it in ways that we can record on film.

There are two properties that we can control as photographers, these are “Quality” of light and “Intensity” of light. Light Quality refers to a few different things. Firstly how hard or soft the light is.

The second thing, when we talk about quality is the colour temperature. This is where some people get easily confused. Most people associate reds and yellows as high temperatures. However this is quite the opposite.

Most films are either Daylight or Tungsten balanced. Daylight is around 5500K. If you are shooting daylight balanced film in unusual lighting situations like under the light of a Tungsten Photo-flood, then the use of an 80A (blue coloured) filter will be necessary to correct the light. Likewise if you are shooting under the light of a Fluroescent tube (which puts out a green cast) a Magenta filter would be needed to correct the colour cast. Colour casts are corrected by the colour opposite them on the Colour Wheel.

Light intensity simply means how powerful the light source is. In the instance of our friend up there the sun, we are talking about an infinitely powerful celestial body of burning gases. Luckily for us it is filtered and softened by many factors including atmospheric conditions and the sheer 149,597,892 kilometres of distance between us and its surface. When using studio strobes and many portable flash units we are able to dial down the power to provide the levels that we require. If a flash unit is not capable of dialing down power then we can move it further away or simply stop down our aperture to let less light in.

Some of you may be wondering how some people just get awesome photo’s of all types under natural light. Is it their mega-expensive full frame DSLR? Nope. Is it their expensive lens hoods and filters? Nope. Is it just that they are great photographers? Sort of. You can’t be a great photographer without fully understanding the way light works. As mentioned above, light has different properties and hard light is normally not wanted unless you are going for the high contrast deep shadows kinda look. As the title mentions, Magical light does happen. It’s what makes the difference between an ok photo and an awesome photo. Magical light happens at Dusk and Dawn each day no matter where you are. However, different environmental factors will greatly affect the quality of this magical light. For Example, If it’s very cloudy, rainy or smoggy then most of it will be wasted and you should put your camera away and go inside for a cuppa.

Most people who have their eyes open will see magical light each and every day. You may not realise what it is before reading this but hopefully afterwards I will have you looking around and noticing more of natures beauty every morning and afternoon.

Magical light is just light from the sun. Early in the morning and late in the afternoon when the sun is lowest on the horizon the photons of light have much further to travel through our atmosphere before landing near us. When the sun is overhead there is a lot less atmosphere to traverse.

Particles in the atmosphere such as smoke, dust and other bits and peices scatter the light coming from the sun and give it a much warmer tone. This effect is known as Rayleigh Scattering and it’s the principle reason why the sky is blue. (Now that you know, can tell your kids when they ask!) During the day it makes the sky blue and early in the morning and late in the afternoon it gives us the dramatic red and orange skies we love so much.

So scattering is one thing but what does that have to do with getting great pics? Instead of looking at the sunset every afternoon try turning around. Look at other things that the warm light is landing on. Look at the contrast between the bluish shadows and the burning colours reflecting the dying sun. 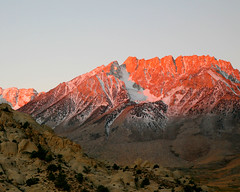 When the sun hits mountains and ranges during the magic hour it makes them burst with reflected colour, while the foreground maintains it’s bluish cast from the shadows. This light was referred to as Alpenglow by Galen Rowell the author of the very popular book Mountain Light. If you have any interest in landscape photography and haven’t read this then go, NOW to your local library and grab yourself a copy. Other examples of Alpenglow are here in a Flickr Gallery I put together.