So I’ve been busy working away with the Bromoil process, trying to master it’s technicalities and nuances. It’s a particularly demanding mistress to understand.

I’ve learned some things lately that have helped me to move forward with this printing process and I’m getting some decent results, one area that seems to still be holding me back is making/choosing the right negative.

I recently took a photo in the foyer of the old railway here in Townsville, The harsh midday light was streaming through two openings leaving a nice reflection on the floor, two mid sized potted plants sat outside in the middle of each opening making for a nice arrangement, the problem was the cars in the background carpark were distracting. 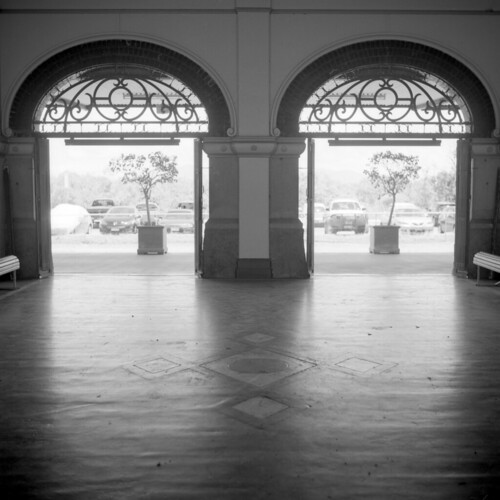 I wondered if it would make a nice Bromoil print, seeing as you can ink in or out whatever you like with this process it seemed like a good idea. So I got cracking and made a Silver Gelatin print on Arista double weight matte fiber.

After making a matrix out of it I got busy inking in the details. I found that it was rather slow taking ink, sometimes I use warm water for the soak as this allows the gelatin to swell more and can help the print take on more ink. After several inking sessions it stopped accepting ink and I left it to dry.

I came back the next day to try again. Once a Bromoil has dryed the gelatin will often allow more ink after re-soaking. This time time I was getting much better contrast building up and the detail was coming out nicely. But wait, what about those cars? Blast I thought. I should have remembered to leave them out of the initial inking, so now I have a nice print with an annoying background element, what to do.

Not to worry, I’ve seen in tutorials that you can later remove ink from a dried print with a normal rubber eraser. So I again dried the print and found that the eraser works a treat, it doesn’t leave a mess and only affects the image slowly, so plenty of rubbing later, I had taken most of the detail out of the area affected and was almost finished.

The last thing I noticed was that there was very little detail in the leaves/branches of the trees, I assume because of the harsh backlight and the fact that all the detail got bleached out during the bleach/tanning step of making the Matrix. Ok what now, I started hunting around for a small stiff paintbrush, luckily my step-daughter has an assortment of painting supplies, I borrowed a brush and dabbed the tip in the ink and worked gently to ink in some tree-like detail to the tops of the potted plants.

It worked a treat and really tipped off the print giving it the balance it needed. Check out the final Bromoil print below. 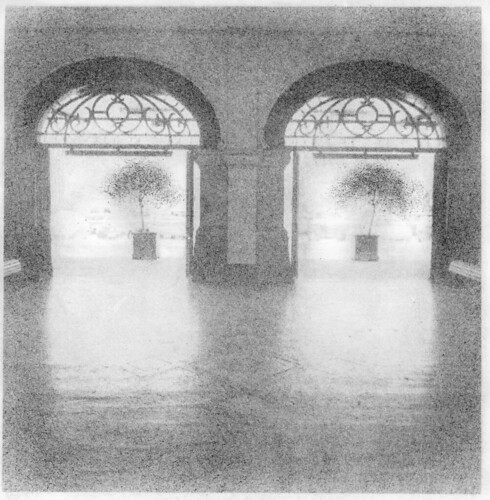