The Leica IIIc camera review is up!

I just knocked up a quick film review with some thoughts and examples of Kodak Tmax 100.

Check it out Here

My most recent acquisition, this beautiful black Rollei 35 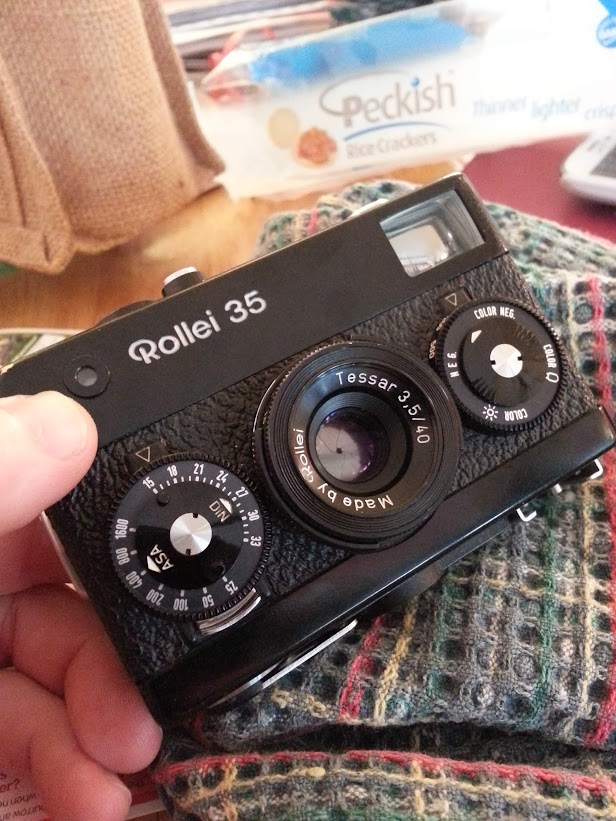 You may recall some time back my brother reviewed his lovely little Rollei 35 S. The higher end version with Rollei HFT Sonnar lens.

This little black Tessar version is cheaper but still a handy little performer. Don’t believe me? go to flickr and search for images shot with them. The little scale focus Rollei’s punch way above their weight class thats for sure.

I got this one for just over $20, it was marked as faulty, after being dropped by it’s previous owner. I found that it wasn’t much work to get the lens barrel unlocked and back into swift motion. Ebay can be a goldmine of opportunities if you know what you are looking for. I’ve saved lots of money over the years buying “seemingly” broken cameras that need very little to get going.

Anyway, this little beauty has a film loaded and is ready to shoot, being as it’s Xmas I’d say i’ll be burning through this roll quite quickly.

I’ve seen a few articles on this over the last few days and at first I wasn’t able to make much sense about it all. (hence no news here until now)

From what I’ve gathered KPP (Kodak Pension Plan) was owed quite a large sum by Kodak (for what we can only assume was some sort of loan during Kodaks financial troubles.) So Kodak has sold off it’s Personalised Imaging business to clear the debt with KPP.

In Australia we call a pension plan “Superannuation” so why would you want a managed pension plan to have control over the film business that we know is quite profitable? It initially doesn’t sound very good but the more you think about it it’s not so bad.

KPP will want to maximise profits from that division in order to get dividends that will pay back the money they lost with Kodak and an excerpt from a Wall Street Journal article reads, and I quote;

“In the coming months, the U.K. retirees, about 15,000 total, plan to establish a governance structure and hire executives to try to generate cash flows that satisfy pension obligations, among other objectives, said Steven Ross, chairman of the U.K. Kodak Pension Plan. Down the road, KPP could sell the businesses, he added, but it would be at least 10 years off.”

So if you are pondering on the future of Kodak film, I think we may continue to see it being produced for some time yet, if there is a sell off of sorts we may see a new company take the reins and steer kodak film in a new direction.

Either way it goes, there are still plenty of options for us film shooters and I’ll been keeping an eye on the news about Kodak and KPP, updates here as they happen.

It seems if you read around the web, everyone has their own way of doing things. Some people use the factory scanner software others use expensive professional apps and everything in between.

I’ve been using Vuescan 9 on Ubuntu Linux for sometime and getting quite acceptable results. Now I know that the V500 isn’t going to get ground breaking detail from a negative, at least not the way a dedicated scanner or drum scanner could but those options are out of my price range so lets not digress.

Even in the limited world of scanning with Vuescan everyone seems to have their own little method. I’ve been using the preview + exposure lock + film base colour lock. method, I turn off all the auto settings and let the scanner do a pass. I set the black and white points and make a white balance adjustment by selecting a white or grey area of the scan. I then save off the file as a jpg and massage it to my liking in the gIMP.

I’ve recently read some articles online about getting better scans out of Vuescan, some which suggest doing multiple passes, others suggest getting a RAW file out of Vuescan and using something like Adobe CameraRaw to convert and adjust the scan.

I decided to do my own little test, I pulled out the binder and flipped back to the year 2009 and picked out a negative I’ve never scanned before. I thought it best so I don’t already have an idea of how it should look “finished.”

Below I present the following:
1. Single pass jpg scan, edited in gimp for curves and colour. unsharpened.

3. Three pass raw scan, converted in UFRaw converter with curves and colour adjustment and imported into gimp for a final colour touch up.

So looking back at the results, there is a slight improvement in grain by doing a three pass scan. while going to the extra trouble to scan in raw doesn’t seem to produce any results that would make it worth the work.

Given that I could have spent a little more time here and there I may have gotten slightly different results, also that the colour balance isn’t perfectly matched between the raw and jpgs.

This has certainly showed me that going RAW for my scans isn’t worth the extra work even if I was able to get even a slight increase in perceived quality. however for stuff that I care about I’ll be doing a three pass scan for sure, it shows noticeably finer grain in the shadows and it’s not much extra work to tick a box, although it does increase scan time.

If this has been useful or if you have any problems with my openly unscientific method give me a yell in the comments.